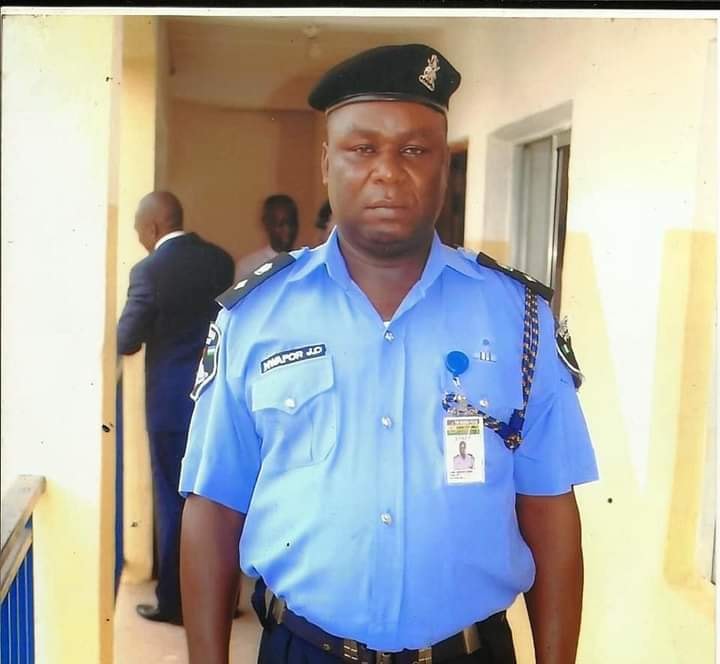 Nigerians have taken to Social Media to ask for the prosecution of James Nwafor, a former commander of the Special Anti-Robbery Squad  (SARS) Awkuzu in Anambra State, who they said was responsible for the extra-judicial killing of dozens of people while he was in charge of the now banned anti-robbery unit in Awkuzu, where they said both the guilty and innocent were slaughtered, including bread winners of families and the last branch of family trees, to the agony of their parents and siblings.

Mr. Nwafor, appointed a security aide to Anambra State governor, Willie Obiano after his retirement from the Police Force, was depicted in some of the heart-wrenching posts that have gone viral on the internet, as a blood-thirsty monster and the evil face of SARS, who lacked the capacity to understand his duty as a law enforcer.

Following the scrapping of SARS by the inspector general of police, Mohammed Adamu, after overwhelming public protests, Nigerians are now asking that the erring SARS officers, who orchestrated the reign of terror and extra-judicial killing of citizens they were supposed to protect in the first place be held accountable. Top on that list is Mr. Nwafor.

Since the public outcry for his investigation and prosecution erupted, the retired asst. superintendent of police has kept a tight lip. He is yet to give his side of the story of what transpired.

But Governor Obiano on Thursday dismissed him as his aide on security, saying the ex-police officer would be prosecuted if found guilty.

CHECKPOINTCHARLEY gathered that Nwafor has since gone into hiding.

There has been no reaction from the police authorities. However, the Police service Commission, PSC, on Friday recommended the prosecution of 24 other ex-SARS operatives for various acts of professional misconduct. It could not be ascertained if Mr. Nwafor’s name is on the list of those to be prosecuted.

The PSC also recommended the sack of no fewer than 37 former members of the disbanded Special Anti-Robbery Squad have from service.

These were the highlights of the report of the Presidential Panel on Reform of SARS set up by the Federal Government in 2018 to reform the infamous unit.

The presidential panel had, among other things, investigated allegations of human rights violations and abuse of office against SARS.

Meanwhile, below are spine-chilling posts by Facebook users, shielding what fate they or their loved ones suffered at the hands of Mr. Nwafor while he was in charge of SARS Awkuzu:

JAMES NWAFOR – ONE OF THE MOST DEADLY KILLER OFFICERS IN SARSIn 2012, some people in Igboville Facebook group were discussing in their forum the case of one popular Facebook user, Mr. Offor. He lived in Malaysia before returning to settle in Lagos. He and his cousin and a friend were arrested in Lagos by SARS officers sent from Awkuzu, Anambra State. They were taken from Lagos to Anambra. The next thing was that they were tortured and badly beaten, and then paraded as armed robbers, kidnappers. But it was never indicated who they kidnapped or robbed, or where or when such kidnappings or robbery occurred. When the wife learned that they were being detained by James Nwafor at Awkuzu SARS, she went to see Nwafor. Nwafor took four million naira from her promising to release her husband. After collecting the money, he told the woman: “Your husband has been killed. Buy don’t worry. I will date you for sometime and then I will arrange for one of my cousins to marry you. Forget your useless husband. You’re too good for him”The wife met me and requested for help. It was impossible to go after James Nwafor then. He was a killer out of control. But now, we will resurrect that case. Nwafor is a coldblooded mass murderer. He must be held accountable.#copied What kind of monster is this?

The man you see on this post is a bloodthirsty murderer. But before I explain further, some introduction.His name is James Nwafor, he was a police officer. His highest rank before retirement was ASP. Currently he’s SSA to the Anambra State government on Security, he’s from Ebonyi State, a father, grandfather, uncle, brother.My family’s path collided with him in November 2012, when my brother was arrested at Ajali, my family went to the police station at Ajali and they said SARS Awkuzu had taken the arrested boys. So my parents went to SARS Awkuzu, this man blatantly denied ever making any arrest or transfers and assured my dad that the boy wasn’t in their custody but as fate may have it, as my parents were leaving the station, they saw my brother and other boys handcuffed together and being led in. My mum screamed and pointed at him, telling this man that that was her son. He ordered that my parents be pushed out that day. The next day, my parents went back and this man told them point-blank that he had killed my brother and that there’s nothing that can be done about it. My mum collapsed immediately and had to be taken to the hospital. However, lots of people including some SARS officers said that he was bluffing and wanted us to bring money. So we brought money, yet he refused to budge, we sold lands and took money in bags yet he didn’t budge. We then went to the commissioner of police Anambra state as at then, Mr Bala Nasarawa, he called Mr James and he claimed they had shootout with armed robbers and probably my brother was one of them, my parents told him they saw the boy at the station and then James, again, denied ever arresting the boy. Then Mr Bala Nasarawa looked my parents in the eye and told them that there’s nothing further he could do since Mr James had denied ever arresting or detaining the boy (apparently my parents can’t identify their own son or they are blind) and that his (Bala Nasarawa) hands were tied.So we went to human rights, of course they took the money and promised heaven and earth and yet, nothing happened, we didn’t get my brother. See eh, the challenge however is that people who made it out of the station as at early 2013 said my brother was still there. They came to my father and told him to make more offers and he did but still no show.However, I’m calling on everyone to ask James Nwafor to kindly explain what happened to my brother, where is he? For those who would ask why are you speaking now, mind you that I have been asking this same question on twitter, where I could tag police handles. https://twitter.com/Ada…/status/1140000709649358848….This man is a known murderer and he doesn’t hide it, many people will doubt me but please don’t take my word for it, read about himhttps://www.thenigerianvoice.com/…/re-appointment-of…Amnesty international has a report on him too as being a beast. Please read it too.https://www.amnesty.org/…/Docu…/AFR4448682016ENGLISH.PDFMr James Nwafor was the OC of SARS Awkuzu during the period when over 40 dead bodies from SARS Awkuzu were thrown into the oji river at the boundary of Enugu and Anambra State. This man’s act had my father swimming in the river to see if he can identify my brother, he didn’t find his body amongst those that were dumped there. During his time at SARS Awkuzu, the station was known as an abattoir for human and it was well known that Human parts can be bought at any point there.This man was renounced by many civil and human rights organisations, yet the Anambra State government under the leadership of Governor Willie Obiano made him an SSA just to shield him from persecution.Yesterday, he was called by a lawyer to ask him questions about my brother’s case and he said the lawyer should do his worst as nothing can happen to him.I’m asking simply that James Nwafor tells us what happened to my brother. If he was a criminal, isn’t it the right thing to take him to court and have him sued and sentenced? Doesn’t a family deserve to know what happened to their child? At what point is it right to kill someone who was already arrested and in custody? Is Mr James Nwafor above the law? Please help my family find justice, we want to know if my brother is alive or dead and if dead why?