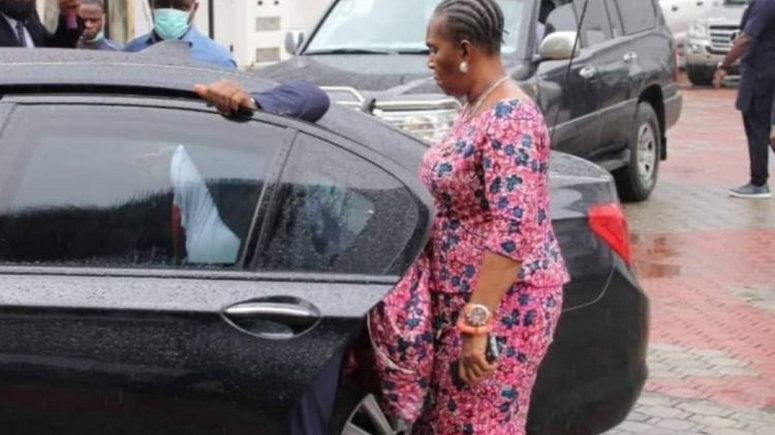 The Rivers State Commissioner of Police, Joseph Mukan has asked on Governor Nyesom Wike to handover former Managing Director of the Niger Delta Development Commission, Joy Nunieh, to him.

Mr. Mukan made the demand while briefing journalists at his office in Port Harcourt on Friday, saying Nunieh is under investigation.

Governor Wike had on Thursday stopped Nunieh’s arrest by police operatives who had stormed her Port Harcourt residence. He then took the former NDDC boss into protective custody in Government House, Port Harcourt.

But the CP said the move to arrest Nunieh was legitimate and in accordance with the law, condemning the action of the governor as unfortunate.

He said, “It is really unfortunate because under normal circumstance if His Excellency (Wike) is saying that he went to rescue her, he is supposed to turn her over to me because I am the Commissioner of Police on ground and I will be in a better position to take her than for him to take her to Government House.

“Nobody said he should not protect his citizens, but everything should be done within the confines of the law.

“So if you rescue your citizen, we expect you to turn her over to the police who are in a better position to protect her. I still believe he is going to turn her over because the exercise was legitimate. It was within the confines of the law.”

Justice E. Thompson on Friday granted an ex parte order in an application filed by her counsel, Slyvester Adaka.

Thompson, also restrained the NDDC or any other body from arresting Nunieh, pending the hearing and determination of the matter before the court.

The former NDDC boss had on Friday testified  before the house of representatives committee on NDDC.

Nunieh was billed to testify on Thursday before the committee but some police officers prevented her from leaving her residence in Rivers state.

But Wike prevented her arrest.

The house committee is probing alleged corruption and mismanagement of N40billion by the current interim management committee (IMC) of the NDDC.

Nunieh had said the blockade at her residence was attempt to prevent her from testifying before the panel.

She had accused Godswill Akpabio, minister of Niger Delta affairs, of fraud and of sexually harassing her.

Nunieh said, “Nobody makes any payment in NDDC without Godswill Akpabio…. When we first came to the NDDC, on the day of going for the inauguration, he told me in the car that ‘Madam MD, If you don’t do what I say, the same pen which I use to sign your letter, it will be the same pen I will use to remove you,” she had said after appearing before a senate panel.

“He said the first thing I should do when I get to Port-Harcourt is to change the dollars in the NDDC account. I was scared to do that.”

Akpabio has denied the allegations.