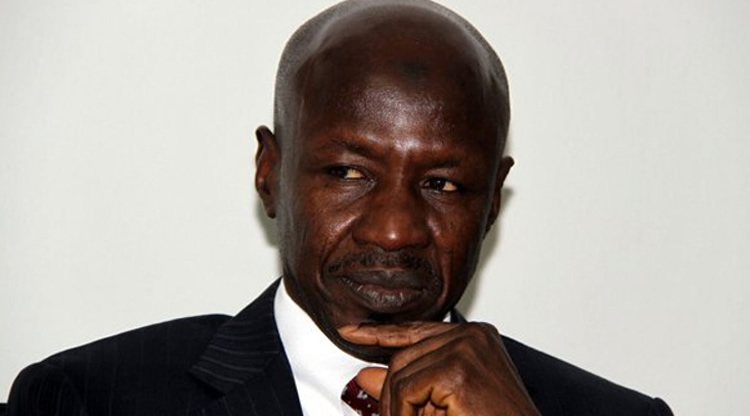 The suspended acting Chairman of the Economic and Financial Crimes Commission, Mr Ibrahim Magu, could not give a proper account of missing 332 out of the 836 recovered properties in March, 2018, the News Agency of Nigeria has reported.

NAN reported on Sunday that the latest allegation against the suspended EFCC boss was contained in a report of the Presidential Committee on Audit of Recovered Assets.

It also stated that the panel alleged that recovered properties were taken over by some top EFCC officials or sold to Magu’s friends and cronies at giveaway prices.

The news agency had, on Saturday reported that the panel, in its report titled, ‘Final Report of the Presidential Investigation Committee on the EFCC Federal Government Recovered Assets and Finances from May 2015 to May 2020,’ alleged that Magu was unable to account for the interest generated from N550bn cash recovered from 2015 to 2020.

The President, Major General Muhammadu Buhari (retd.), set up the Justice Ayo Salami-led committee, which is currently investigating allegations of corruption against Magu, after the panel on the audit of recovered assets submitted its report.

Besides the Chairman, Alhaji Abdullahi Ibrahim, other members of the previous committee were Deputy Inspector General Anthony Ogbizi; a member from the Federal Ministry of Justice; Mualledi Dogondaji from the EFCC; Hassan Abdullahi from the Department of State Services; an unnamed member from the Office of the Accountant General of the Federation; Chinedu Ifediora from the Nigerian Financial Intelligence Unit, while Mr Kazeem Attitebi served as the secretary.

NAN reported on Sunday that PCARA’s report indicated that there was massive wastage and deterioration of physical assets including landed properties, cars and vessels recovered by the EFCC due to poor management.

It also noted that the EFCC failed to preserve and realise the economic value of the recovered assets, noting that some of the assets were recovered over 15 years ago and left fallow

The report stated, “A disturbing example is the two vessels that allegedly sunk at the NNS Beecroft Naval Base, Lagos and the NNS Pathfinder Naval Base in Port Harcourt without trace under the watch of the acting Chairman of the EFCC.

“The vessels named MT GOOD SUCCESS, MV PSV DERBY and MV THAMES were allowed to sink in spite of several warnings from the Navy on the need to evacuate the petroleum products in the vessels.

“The (suspended) acting Chairman has yet to provide a report on what happened to these vessels,” the report said.

According to NAN, PCARA’s report also revealed that the few consultants hired by the EFCC were not managing a substantial number of the recovered assets and that the EFCC had no capacity to manage the entire assets on its own.

The committee, therefore, alerted the nation to the economic and environmental implications of this negligent of duty by the commission.

It also stated that the EFCC made conflicting submissions or returns to it in respect of the non-cash assets which substantially affected the committee’s assignment.

The report read in part, “For instance, the EFCC stated 836 as the number of recovered properties in the original returns it made to the President on July 4, 2017.

“However, in its first returns to PCARA on December 13, 2017, the EFCC short changed the system and gave the figure of 339 thereby failing to account for 497 properties

“It is interesting to note that when the acting chairman was further queried on this lapse, he made further contradictory second return of 504 on March 9, 2018 thereby bridging the gap to 332 properties.’’

The committee identified lack of internal control mechanisms/systems within the EFCC and the lack of adequate returns by the EFCC departments and zonal offices as reasons for these discrepancies and inconsistencies by the commission.

He disposed of seized assets without regard for law – Report

It also alleged that the suspended EFCC boss neglected or refused to comply with the Regulations on the Management of Recovered Assets, 2019 as he embarked on disposing some of the properties without regard to extant law.

It stated, “These regulations were issued in line with international best practices and to ensure that all the anti-corruption agencies report all their recovered assets in a database provided by the Federal Government.

“It is important to note that the (suspended) acting chairman in apparent disregard of the regulation is disposing of these properties without regard to extant laws, and regulations and without reference to the Office of the Attorney General of the Federation and in effect, there is no way to have an audit of the property.

“This is also a clear sign that there is a deliberate attempt to hide the exact figures of recoveries, which is an indication of fraudulent intent.

“These actions of the (suspended) acting Chairman in refusing the regulations are a clear case of refusal to follow lawful instructions and directives contrary to the provisions of the Act that establishes the EFCC,’’ NAN stated, quoting a separate report on the matter, addressed to the President.

The report stated, “Most of the recovered assets are allegedly sold without anyone knowing and without proper records and without recourse to the Federal Ministry of Works and Housing that has the mandate to undertake evaluation of such properties.

“Some of the assets have been taken over by the EFCC officials while some are sold at giveaway prices to friends and cronies of the acting chairman.

“It is also on record that the (suspended) acting chairman is maintaining different accounts, including using proxies who return the benefits of the sold assets to him.

“These funds are then used to procure property and lands in the names of some of his proxies,’’

NAN also reported that one of the investigative committees set up by the President to look into the activities of the EFCC under Magu, alleged that the suspended EFCC boss turned the commission into a ‘glorified police station’ for alleged selfish motives.

According to the report of the committee, Magu has continued seconding police officers to the EFCC in spite of the massive recruitment of officers and men carried out by the commission in recent years.

It stated, “The blatant display of arrogance and acquisition of illicit wealth have turned the EFCC into a glorified police station.

“Despite massive recruitment of officers and men in recent years by the (suspended) acting chairman at the EFCC, he is still seconding police officers to the EFCC because he is comfortable with his fellow officers to carry out his illicit activities.

“He does not have any exit strategy for the police even though the EFCC officers are more experienced in the investigation of economic and financial crimes,’’ the report further noted.