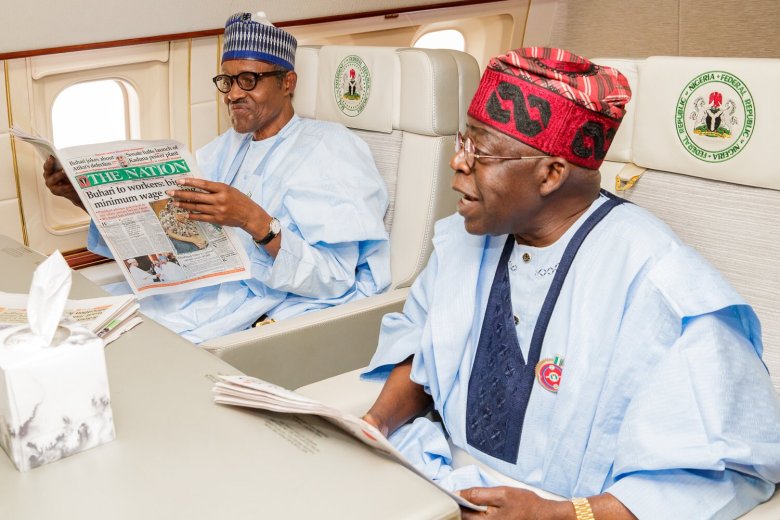 Adebanjo said this after the National Executive Committee of the APC on Thursday dissolved its National Working Committee, which was seen as a slap on Tinubu, who is believed to be pro-Adams Oshiomhole, the sacked chairman.

It is an open secret that Tinubu, a former governor of Lagos State, wants to run for the presidency in 2023, and the sacked chairman was fully behind his ambition.

The Presidency has thrown all it can in a flat effort at damage control, saying there was no rift between Buhari and Tinubu. However watchers see the dissolution of the NWC as an attempt to frustrate Tinubu’s presidential dream.

Interestingly, Adebanjo also added that Tinubu was also deceiving the President, labelling the APC as a gathering of incompatible persons.

According to him, there was no ideology binding the party members together and that it was all about sharing offices and power.

Adebanjo said, “I have worry for him (Tinubu). He knew all these things but he relied on Buhari and worked to make him the President. I said it before publicly that Buhari is deceiving Asiwaju and Asiwaju is deceiving Buhari. Everybody is trying to use the other. Why can’t Tinubu hammer on restructuring knowing that this was what brought Buhari to office?

“I have been in this game for 70 years. So, many of those who are talking now were not born then. That is the truth – even Buhari was a toddler. He is now 74. Each time I tell you, why should Tinubu, the Vice-President (Yemi Osinbajo) and all those who were in Alliance for Democracy run to the APC? Why are they hesitating now to stand for restructuring? They can’t talk.

“All the things I am telling you now – it is not the first time. I said both Jagaban (Tinubu) and Osinbajo should get out of the APC. I said it openly. It is a disgrace and disservice to the Yorubaland. So, what is happening now shows there is nothing to bind them together.”

Reacting for the first time to the recent developments in his party, Tinubu in a statement on Saturday, dismissed insinuations that the dissolution of the NWC by the NEC at a meeting, presided over by the President and attended by top government officials and party chieftains, was targeted at his supposed presidential ambition in 2023.

He pointed out that he was yet to make a decision on 2023 given the health and economic crises superimposed by the COVID-19 pandemic, which had infected no fewer than 24,077 and killed 558 persons in the country.

He said rather than engage in politicking around 2023, he had devoted the last few months to thinking of policies that could help the nation during the present exigency.

The statement partly read, “To those who have been actively bleating how the President’s actions and the NEC meeting have ended my purported 2023 ambitions, I seek your pity. I am but a mere mortal who does not enjoy the length of foresight or political wisdom you profess to have. Already, you have assigned colourful epitaphs to the 2023 death of an alleged political ambition that is not yet even born.

“At this extenuating moment with COVID-19 and its economic fallout hounding us, I cannot see as far into the distance as you. I have made no decision regarding 2023 for the concerns of this hour are momentous enough.

“During this period, I have not busied myself with politicking regarding 2023. I find that a bit distasteful and somewhat uncaring particularly when so many of our people have been unbalanced by the twin public health and economic crises we face.

“Personally, I find greater merit trying to help in the present by offering policy ideas, both privately and publicly, where I think they might help.”

Tinubu added that he had toiled for the party as much as any other person and perhaps more than most, and that like himself, no member of the party should have problem with making personal sacrifices.

Meanwhile, disgraced Oshiomhole and the 16 members of the defunct NWC loyal to him have accepted their fate and the dissolution by NEC.

Oshiomhole, at a press conference in Abuja on Saturday, declared allegiance to Buhari and the party now under the leadership of the Governor Mai Mala Buni-led Caretaker /Convention Planning Committee.

He said, “At the end of the NEC meeting as you all know, the NWC was dissolved and accordingly I ceased to be the national chairman of the APC.

“Mr President graciously invited me to run for the office in 2018. The President told me then that if we do not reform the APC, we can as well forget about the party.”

Oshiomhole added that he had no regrets. “You know that reforms are challenging and it will entail taking difficult decisions. Mine has been a life of trouble and I accepted this and I believe I did my best.

“I’m happy that at the end of the day, our President had more votes in 2019 than in 2015. We have more members in the National Assembly.