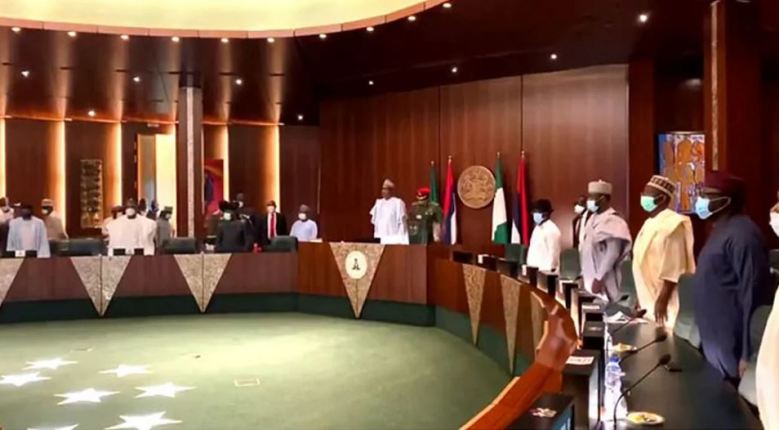 The era of Adam Oshiomhole as chairman of the All Progressives Congress, APC, seems to be over as the party on Thursday dissolved its National Working Committee.

The decision was reached at the National Executive Council meeting held at the presidential villa Abuja.

The suspension of Oshiomhole had been affirmed last week by the appeal court. Based on that, 17 members of the NWC loyal to him, in an emergency meeting, appointed a former governor of Oyo State, Senator Abiola Ajimobi, as acting chairman. Ajimobi himself is said to be fighting for his life against COVID-19.

But in an audacious move, Victor Giadom, alongside two other NWC members, declared himself as the acting chairman in a press conference on June 17. According to him, a decision of the FCT high court supported his claim to chairmanship. The court had in March given him the green-light to be the acting national chairman.

Amid the drama and intrigues that played out, President Buhari on Wednesday took charge of his party and threw his support behind Giadom. A move seen by many as a damnation of Mr. Oshiomhole and a national leader of the party, Bola Tinubu, believed to be harbouring a presidential ambition. His ambition had the support of Mr. Oshiomhole.

The former Edo state governor, who had been having a running battle with his successor, Godwin Obaseki, looks to have been consumed by the same battle. It is understood that both men had fallen out after Obaseki rebuffed the attempt by his predecessor to continue to govern Edo, using him as proxy. Recall that the same Oshiomhole had during his time as governor boasted that he had killed godfatherism in Edo politics. He was then referring to the Igbinedion family grip on the state.

Oshiomhole had recently, without reasonable grounds, questioned the authenticity of Obaseki’s school certificates and based on that, disqualified him from contesting the APC Edo governorship primary. That decision did not go than well with majority of APC members, CHECKPOINTCHARLEY gathered.

Obaseki had since defected to the peoples democratic Party and he is expected to clinch the PDP’s governorship ticket. The primary is still going on as at the time of filing this report.

It is widely believed that it was Obaseki that influenced the suspension of Oshiomhole by his ward in Edo. Based on that a high court ruled that since he was no longer a member of the party, he could no longer continue to function as its chairman.

Mr. Oshiomhole fought against the suspension but lost at the lower and upper courts.