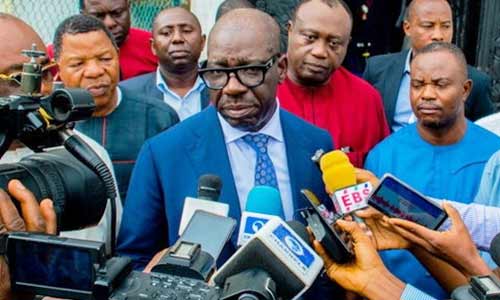 Embattled Edo State Governor, Godwin Obaseki, has announced his resignation from the All Progressives Congress (APC), following his disqualification from participating in the party’s governorship primary slated for June 22.

Mr Obaseki announced this after meeting with President Muhammadu Buhari at the State House in Abuja on Tuesday.

The governor had over the weekend said he would take a decision on his membership of the APC after meeting with the president.

His former party, APC had denied him the chance of seeking reelection on its platform, alleging inaccuracies in his school certificates.

The APC national chairman, Adams Oshiomhole, is widely believed to be behind Obaseki’s travails.

Despite championing Obaseki’s emergence as his successor in 2016, both men had fallen apart after it was alleged that Obaseki had rebuffed attempts by Oshiomhole to be a political godfather in Edo.

It is expected that governor Obaseki will defect to the Peoples Democratic Party, whose leaders he has been meeting with since his disqualification by the APC.