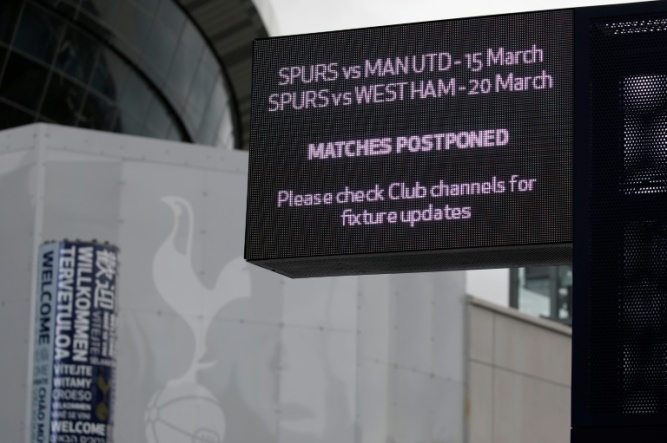 Premier League clubs will ask players to take a combination of pay cuts and deferrals amounting to 30 percent of their annual salary due to the financial crisis caused by the coronavirus pandemic, the league said in a statement on Friday.

The English top flight’s highly-paid stars have come under increasing pressure to take pay cuts from government officials in recent days after four clubs said they would use public money to subsidise pay for non-playing staff.

Tottenham, Newcastle, Norwich and Bournemouth planned to use the UK government’s furlough scheme to pay 80 percent of wages of non-playing staff up to a maximum of £2,500 ($3,100) a month.

The average salary for a Premier League player is £3 million a year, according to the latest Global Sports Salaries survey.

“Premier League clubs unanimously agreed to consult their players regarding a combination of conditional reductions and deferrals amounting to 30 per cent of total annual remuneration,” the Premier League said in a statement.

The Professional Footballers’ Association (PFA) will meet with league and club officials to discuss the proposal on Saturday.

A meeting between the league’s 20 clubs also agreed to indefinitely extend the suspension of the season until it is “safe and appropriate” for football to return.

The clubs are desperate for the season to be finished if possible to avoid the potential of having to reimburse broadcasters a reported £760 million ($942 million) if they fail to fulfil fixtures for television contracts.

“There is a combined objective for all remaining domestic league and cup matches to be played, enabling us to maintain the integrity of each competition,” the statement added.

“However, any return to play will only be with the full support of Government and when medical guidance allows.”

Despite their own financial troubles, Premier League clubs agreed to provide a £125 million fund for the English Football League and National League to help those further down the football pyramid.

A £20 million charitable donation will also be provided to help those affected by coronavirus.

Liverpool skipper Jordan Henderson has reportedly led a meeting of Premier League captains to arrange an extra charity fighting fund for the National Health Service (NHS) made up of player donations on top of any wage cuts or deferrals agreed with the PFA.

The PFA believes players should not be used as scapegoats for clubs who have chosen to furlough non-playing staff despite having the means to continue paying them 100 percent of their salary.

Tottenham’s decision to furlough 550 staff on Tuesday came on the same day it was revealed chairman Daniel Levy was paid £7 million last season.

“We are aware of the public sentiment that the players should pay non-playing staff’s salaries. However, our current position is that -– as businesses — if clubs can afford to pay their players and staff, they should,” the PFA said in a statement.

Julian Knight, chair of the Digital, Culture, Media and Sport committe, who had labelled the Premier League a “moral vacuum” for using government money believes no top-flight club should now be using the furlough scheme.

“My main concerns were, when I saw the Spurs and Newcastle stories, it sticks in the throat to have taxpayers in any way funding the economic model of the Premier League, which is not in the real world.