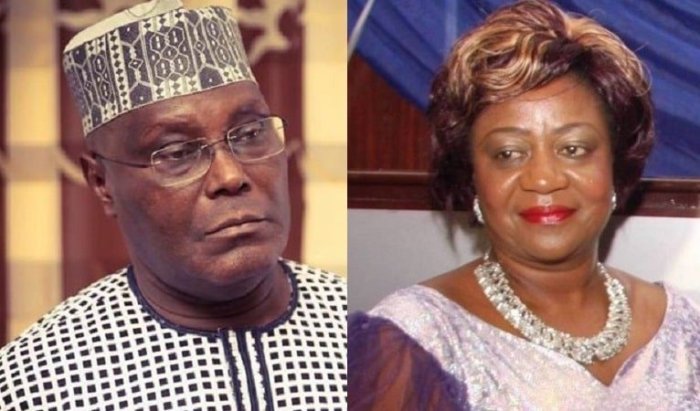 Atiku Abubakar, on Tuesday took further step in getting President Muhammadu Buhari’s Special Assistant on Social Media, Lauretta Onochie, to purge herself of alleged libelous tweets she made in May against the former vice president when he appeared at the registry of the High Court of the Federal Capital Territory in Maitama, Abuja, to sign and file his deposition in support of the N2.5bn libel suit he instituted against the controversial Buhari aide.

Atiku had on June 26, 2019, filed the suit against Onochie for her alleged libelous tweet against him via her twitter handle on May 7, 2019, in which she suggested that Atiku was on the watch list of security operatives in the United Arab Emirates and that he had travelled to shop for terrorists in the Middle East.

In the suit marked CV/2287/19, the former presidential candidate of the Peoples Democratic Party (PDP) is asking the court order Onochie to pay him the N2.5bn as “general, aggravated, punitive and exemplary damages over the untold embarrassment, derision, public ridicule, odium, obloquy, marital disharmony, mental agony and psychological trauma which the defendant’s publications have caused the claimant.”

Photos of Atiku with his lead counsel, Mike Ozekhome (SAN) and others in the legal team were sent to journalists on Tuesday.

“The former Vice President was physically at the Registry to sign his witness deposition (on oath) before the Commissioner for Oaths, on the case he instituted against Lauretta Onochie.

“The Waziri is claiming amongst others, the sum of N2.5 bn only, from the Presidential Assistant on Social Media, as general, aggravated, punitive and exemplary damages against her.

“Atiku is claiming this sum from her for her defamatory story published on her twitter handle and Facebook page, in which she stated that Atiku was on the UAE watch list, as a wanted man, asking, ‘shopping for terrorists?’”