Home › News › Where Is Dadiyata?

It is believed that he was abducted by heavily armed men at about midnight while driving into his residence at Barnawa in Kaduna state.

While his whereabouts remain a mystery, there have been claims that Dadiyata was whisked away by operatives of the Department of State Services (DSS).

Dadiyata, a social media influencer said to be loyal to the Kwankwasiyya movement, has been critical of the All Progressives Congress (APC).

He is said to also be an avid supporter of Abba Yusuf, the governorship candidate of the Peoples Democratic Party (PDP) in Kano state in the last general election.

Sanusi Dawakin-Tofa, spokesman of Yusuf’s 2019 campaign, had on August 3, claimed that the social media influencer was “arrested” by the security agency.

He had also called on the DSS to release Dadiyata without any condition.

“Dadiyata is the leading social media activist in Twitter community that protects and projects Kwankwasiyya ideology and the PDP in northern Nigeria,” he had said in a statement.

“We want to use this medium to call on security agencies to as a matter of responsibility release Abubakar Dadiyata unhurt and without any condition.

“As members of the opposition in Kano and Nigeria we will continue to give constructive criticism to the ruling party within the confines of the law.”

Believing that the DSS is behind the abduction of Dadiyata, the PDP also asked the secret police that he be released.

“The PDP therefore demands the DSS high command to speak out as well as take urgent steps to secure the release of Idris from his abductors before it is too late,” Kola Ologbondiyan, spokesman of the opposition party, said in a statement.

“This is especially because the polity is already overheated.”

But the DSS denied having the social media influencer in its custody while the police in Kaduna said they have commenced investigation into the circumstance that led to his disappearance.

Fourteen days after Dadiyata’s arrest or abduction, the PDP new media department staged a protest in Abuja asking the DSS to release him.

His disappearance has also sparked outrage on social media, with many justifying his right to freedom of speech and demanding his release.

‘Abduction,’ ‘Arrest’ or ‘…?’
Who has the answers to all the questions family members, relatives, friends & well wishers of Abubakar Idris AKA Abu Hanifa (@dadiyata ) are asking?#whereisdadiyata #prayfordadiyata 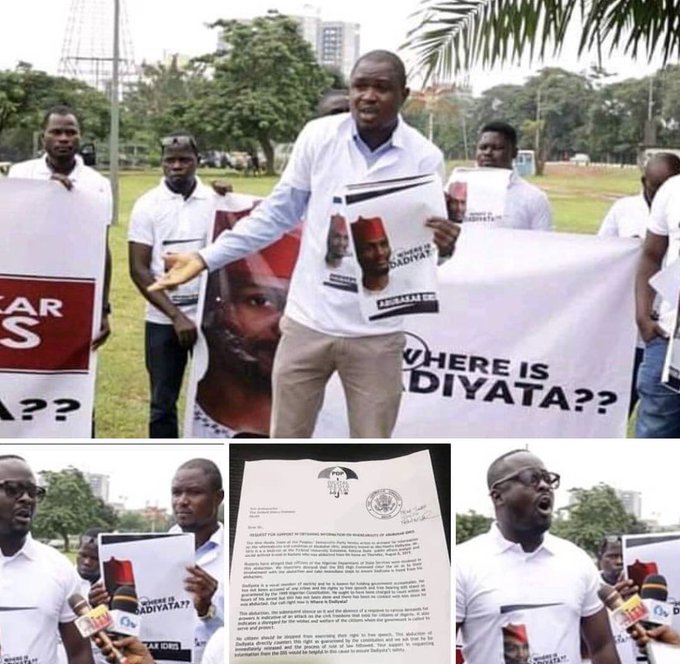 Sir, @GovKaduna you are a father and a leader. you are a learned man in both the western context and Islamic context. The responsibility of the safety of your people is something Allah Will interrogate you on on the Day of Judgemen. Pls Sir, help us find @dadiyata Thank u Sir.

@GovKaduna should help you find dadiyata?? Are you ok? Sit down their, don’t go and look for him yourself..

We won’t get tired of tweeting about and praying for @dadiyata. He was forcefully taken away from in front of his house—signifying an impetus. So it’s either vendetta or kidnap for ransom. The latter can be ruled out since no demands have been made yet.

Every Life in Nigeria

matters and we must demand answers when it seems questionable #FreeDadiyata

Where is Dadiyata??? Abducted 15 days ago.
What is the government doing to find him and support his family through this difficult times?

Security Forces should be held responsible for Dadiyata, if he’s not with them they know where he is.

Dear @dadiyata wherever you are, InshaAllah you will reunite with your family and friends health. May the sponsors of your abduction never have peace in their life, may their life becomes miserably for hurting innocent Abubakar.

I want to use the opportunity of this festival of sacrifice to call for the release of Ababukar Idris, a young, vibrant lecturer and PhD student known on Twitter as @Dadiyata, who used to write biting but thoughtful critical commentaries on the federal, Kano, and Kaduna state 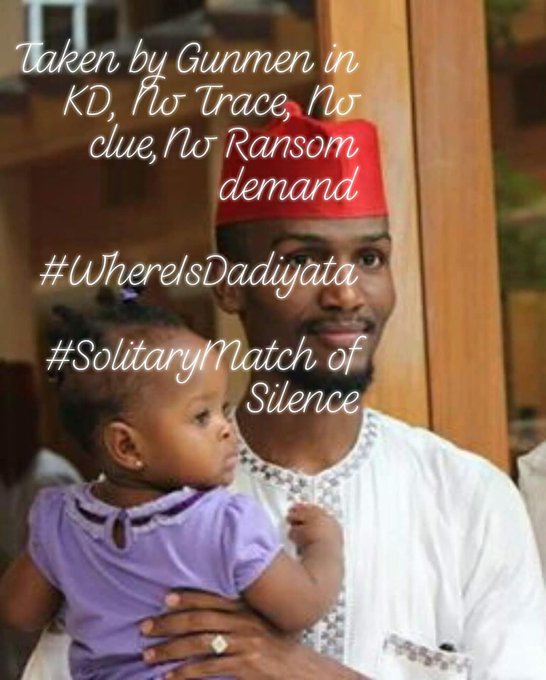 1,009 people are talking about this

Like Loading...
‹ Israel Bars Visit By Two US Congresswomen After Trump Call
El-Zakzaky, Wife Return To Nigeria, Whisked Away By DSS Operatives ›