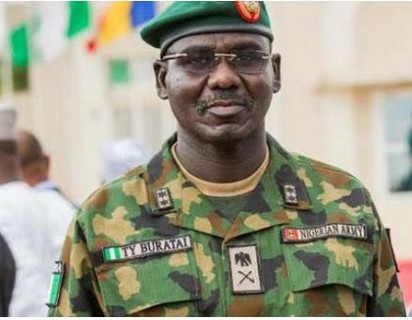 Army authorities on Friday confirmed the killing of a colonel, a captain and three soldiers by Boko Haram insurgents in Borno State.

He said that the incident occurred on Wednesday in Jakana area of Borno, adding that the officers and soldiers were on transit from Maiduguri to Damaturu when they ran into an ambush by the terrorists.

Ado, however, said that troops of 212 Battalion deployed at Forward Operating Base, Jakana, dealt with the insurgents, neutralising an unconfirmed number of them.

He said that Boko Haram and ISWAP terrorists tried to infiltrate the military base to garner logistics but were repelled by the troops.

According to him, the terrorists came around 6:45 p.m. in seven gun trucks and tried to infiltrate the camp, but the attack was thwarted with heavy fire and bombardment by the troops.

“The terrorists could not withstand the firepower of the troops after losing significant number of equipment and personnel in an exchange of fire.

“They lost initiative and withdrew in disarray along Benisheikh-Damaturu axis and abandoned a damaged utility gun truck which was earmarked to convey looted items.

“Sadly, a Colonel and a Captain, as well as three soldiers on transit from Maiduguri to Damaturu, ran into an ambush staged by the fleeing terrorists from the Jakana axis, which led to their unfortunate deaths,” Ado said.

He said that the Chief of Army Staff, Lt.-Gen. Tukur Buratai, had commiserated with the families of the fallen heroes.

“The sacrifices of the fallen heroes in the ongoing fight against terrorism and insurgency is no doubt painful to all.

“But, that will further spur us to do more to ensure that our country remains secure, peaceful and free from terrorist activities for the overall interest of the nation,” he quoted Buratai as saying.