The document, posted on Twitter by Reno Omokri, a PDP member Wednesday afternoon, had a strong directive from national secretary of INEC, Rose Oriaran-Anthony, to other senior officials of the commission on challenges recorded in transmitting voter accreditation data to a server.

In fact sanction was threatened if any officer should fail to do so.

“The commissioner has observed, with deep concerns, the number of smart card readers (SCRs) that do not have data of accredited voters in the just concluded presidential/NASS elections nationwide,” Ms Oriaran-Anthony said in the March 25 letter to all resident electoral commissioners (RECs) across the country.

She noted in the memo that 4,786 smart card readers did not have data on accredited voters following the presidential election on February 23, representing about four per cent of the total SCRs deployed for that exercise.

“Attached is the chart, showing the PUs (polling units) not uploaded to the SCR accreditation backend, for each of the states,” Ms Oriaran-Anthony added in the memo.

Ms Oriaran-Anthony then directed all concerned RECs to liaise with their technical and electoral operations officials to clarify why the card readers failed to upload accreditation data on election day.

The RECs were given until March 28 to submit their replies.

INEC had denied using a central server for the conduct of the election, claiming that doing so would have contradicted the Electoral Act.

The electoral body insists on its position despite notwithstanding some of its presiding officers in the election giving evidence to the contrary bz way of affidavit.

Meanwhile, Festus Okoye, a spokesperson for INEC, has refused to comment on the latest development. 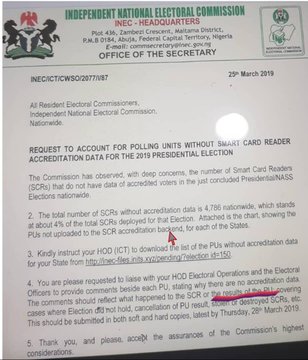 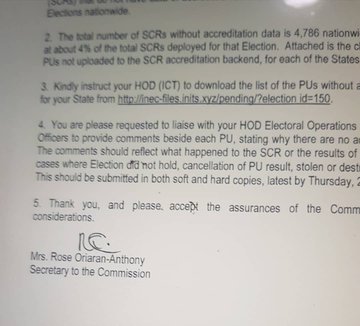 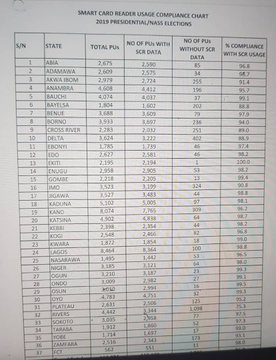 This is a circular from INEC to its 36 Resident Electoral Commissioners, threatening sanctions on RECs who fail to send data to INEC HQ through their server. INCONTROVERTIBLE evidence @INECNigeria has and had a server.#IncontrovertibleProofOfINECServer

1,877 people are talking about this