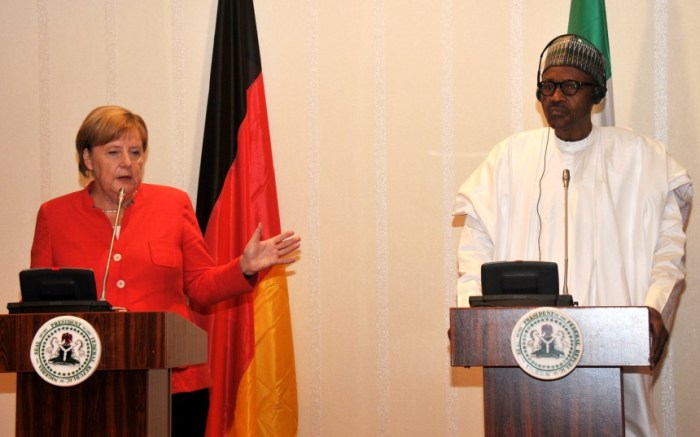 Days after his Rule of Law comment sparked national outrage, President Muhammadu Buhari has backpeddalled, assuring visiting German Chancellor, Angela Merkel that his administration will always uphold the sanctity of the rule of law in governing the country, according to a statement by Garba Shehu, Mr Buhari’s spokesperson.

Buhari also promised that all agreements between the two nations will be fully respected.

Recall that the president had recently courted controversy when he said that the Rule of Law must be subjected to national interest and security.

Speaking at the opening ceremony of the Nigerian Bar Association (NBA) conference last Sunday, the president claimed it was trite law that national security should always trump the rule of law.

He said, “Rule of Law must be subject to the supremacy of the nation’s security and national interest.”

But in a statement released by Mr. Shehu after his boss met with Mrs. Merkel said, “In his remarks during a bilateral meeting, the president said unity and harmony in every society can only be preserved by observing the rule of law, and ensuring that agreements reached in good faith are followed through to the mutual benefit of countries.

“President Buhari told Chancellor Merkel and members of her delegation that the rule of law embodies all the rightful mechanisms for conflict resolution, both within the country, and in dealing with all foreign partners, assuring that his administration remains focused on delivering a peaceful, economically viable and politically stable polity to all Nigerians.”

President Buhari is a former army general, with a history of imprisoning two journalists and rights activists when he was a military dictator, and his comment had sparked fear and outrage across the country.

In a statement Thursday, Nobel Laureate, Wole Soyinka mocked the president by saying he (Buhari) had obviously given a deep thought to his travails under a military dictatorship and concluded that his imprisonment at that time was also in the “national interest.”

Buhari was imprisoned for years after his military dictatorship was overthrown in 1985 by General Ibrahim Babangida and his follow coup plotters.

Mr. Soyinka said, “At his first coming, it was ‘I intend to tamper with Freedom of the Press,’ and Buhari did proceed to suit action to the words, sending two journalists – Irabor and Thompson – to prison as a reward for their professional integrity.

“Now, a vague, vaporous, but commodious concept dubbed “national interest” is being trotted out as an alibi for flouting the decisions of the Nigerian judiciary. President Buhari has obviously given deep thought to his travails under a military dictatorship, and concluded that his incarceration was also in the ‘national interest.”

Mr. Buhari’s sad commentary about the supremacy of national security over the Rule of Law was the last thing Nigerians wanted to hear from their president, with a nasty history of disrespecting court orders and due process, at a time they wanted assurances that his government will henceforth abide by the law.