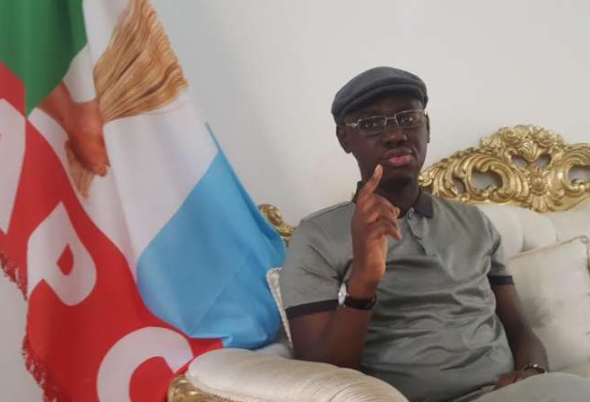 Former Deputy National Publicity Secretary of the All Progressives Congress (APC),  Comrade Timi Frank, has written an open letter to the United Nations, UN, on the assault on Nigerian lawmakers and opposition Leaders by the Government of President Muhammadu Buhari, asking the international community to rescue Nigeria from dictatorship.

He said the threat against Nigeria’s democracy was an open secret and called on the international community to intervene.

BUHARI AND THREATS TO NIGERIA’S DEMOCRACY

Once again, I write to draw your attention to the tyrannical and undemocratic conducts of agents of the present administration in Nigeria, led by President Muhammadu Buhari, which if not urgently checked, can lead to the abortion of the 2019 general elections and irretrievably scuttle the nation’s hard earned democracy. On Tuesday, the world woke up to a horrendous report of massive security crackdown against the President of the Senate, Dr. Abubakar Bukola Saraki and his Deputy, Senator Ike Ekweremadu. The residences of the two presiding officers of the Senate were put under siege by security forces acting on orders from the presidency.

The siege on the residences of Saraki and Ekweremadu has continued to receive widespread condemnation from Nigerians who see it as a return of jackboot dictatorship reminiscent of military regimes in the country. This is why I want to urge the United Nations not only to condemn the crackdown against opposition figures and perceived political enemies in the country, ahead of the 2019 general elections, but to lead other world leaders including the G-7 nations, European Union, African Union and the Economic Community of West African States to stop the ongoing security crackdown on opposition figures and wanton abuse of the fundamental human rights of Nigerians irrespective of their political persuasions.

Permit me to state that the resort to the use of security forces to advance political interests by this administration, if not checked, may sooner than later cascade the entire country into a vortex of cataclysmic political struggle capable of tearing the economy into shreds, truncate democracy and lead to unimaginable hardship for the already pauperized and traumatized masses of this country.

May I also state that the UN must act urgently to protect democracy in Nigeria and safeguard the precious lives of countless opposition political actors. This is in view of allegations that certain people are considered to be in opposition to the re-election bid of Mr. President in 2019. Hence the Government is believed to have mapped out plans to suppress and, at the extreme, eliminate them. This may appear to be an unconfirmed report but as the saying goes, there is no smoke without fire. The names of the perceived enemies of government include the President of the Senate, Dr. Abubakar Bukola Saraki and his Deputy, Senator Ike Ekweremadu, whose residences were on Tuesday besieged by the police in Abuja, among others.

Recall that the National Chairman of the Reformed All Progressives Congress (RAPC), Engineer Buba Galadinma and his son were recently involved in a road mishap. It is telling that the accident occurred shortly after the National Chairman of the APC, Comrade Adams Oshiomhole openly boasted that he was going to “crush him.” The National Chairman of the Peoples Democratic Party (PDP), Prince Uche Secondus, Governor of Rivers State, Nyesom Wike and the Ekiti State Governor, Ayodele Fayose, have continued to voice out grave concerns about the their personal safety. Also on the watch list is a frontline member of the RAPC, Alhaji Abubakar Kawu Baraje and Senator Dino Melaye, whose convoy was recently attacked by security forces in Kogi State.

Tuesday’s barbaric attempt to use security forces to create a lacuna in the Senate in order to force a leadership change was a coup against democracy in the country. It also underscores the level of desperation by the present administration to silence the legislative arm of government which is condemnable. The illegal deployment of heavily armed security forces to detain and muzzle highly placed opposition figures, both within the ruling APC and the PDP also amounts to a denial of their inalienable rights to freedom of association and to hold opinion which are guaranteed by the nation’s Constitution and several international charters, to which Nigeria is a proud signatory.

Permit me to say that Nigeria deserves the protection and every help possible from the international community to sustain its democracy, protect fundamental rights of citizens and above all to prevent it from imminent disintegration. The threat against Nigeria’s democracy is an open secret. I call on the UN all allies of Nigeria to rise to her defence and help to contain it. The UN and leaders of the free world owe it a duty to Nigeria as a good standing member of the Common Wealth and comity of nations, to help prevent this looming political catastrophe before it snowballs out of control as fears abound that the situation will degenerate further.