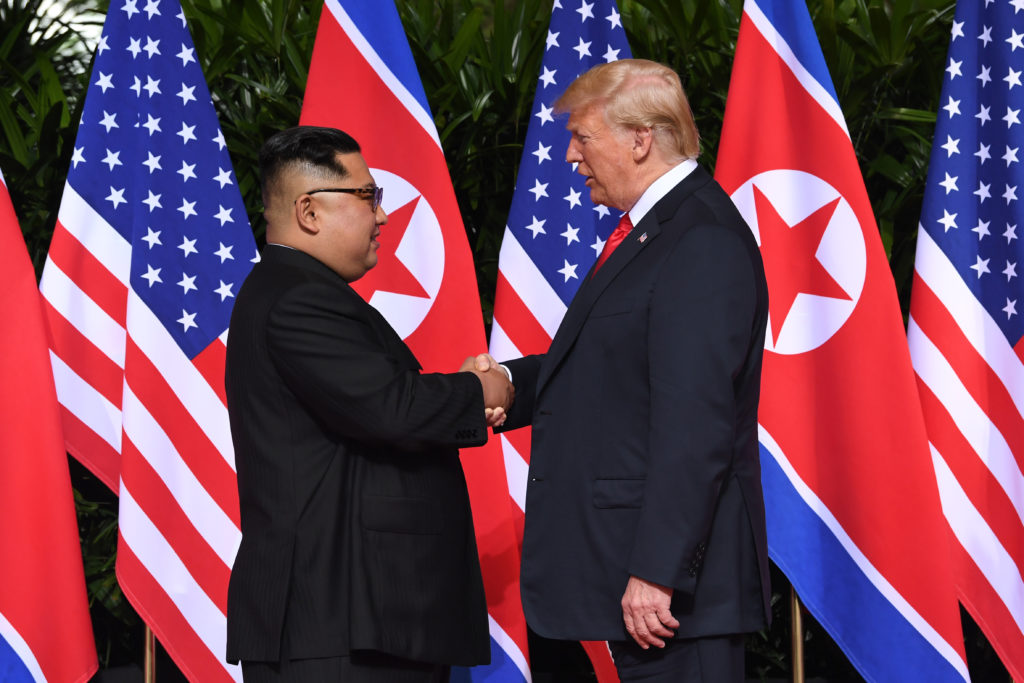 Donald Trump and Kim Jong Un made history Tuesday, becoming the first sitting US and North Korean leaders to meet and shake hands, as they seek to end a tense decades-old nuclear stand-off.

The two men strode toward each other and shared the momentous handshake beneath the white-washed walls of an upscale hotel in neutral Singapore, before sitting down for a half-day of meetings with major ramifications for the world.

They shook hands for several seconds, Trump reaching out to touch the North Korean leader on his right shoulder.

As they sat down for their one-on-one meeting, the US leader predicted a “terrific relationship” with Kim.

The extraordinary summit was unthinkable only months ago.

Then, the two nuclear-armed foes appeared on the verge of conflict, as Kim conducted nuclear and missile tests and the two leaders slung personal insults.

Trump had cajoled the international community to exert “maximum pressure” to buckle Kim’s regime and threatened to unleash “fire and fury like the world has never seen” if Pyongyang did not disarm.

For his part, Kim called the US leader “mentally deranged” and a “dotard” as he fired off a series of provocative weapons tests.

That seemed a distant memory amid the palms of the ultra-exclusive Capella Hotel.

It is a potentially legacy-defining meeting for both men — comparable to president Richard Nixon’s 1972 visit to China, or Ronald Reagan’s summit 1986 with Mikhail Gorbachev in Reykjavik.

And it is part of what Trump calls a “one-time” offer to resolve the stand-off through diplomacy.

“We will all know soon whether or not a real deal, unlike those of the past, can happen!” Trump tweeted shortly before departing for the summit.

The pair — Kim in his thirties and consolidating his dictatorship, Trump in his seventies and struggling to bend Washington to his impetuous will — are unlikely protagonists, both instantly recognisable, so much larger-than-life as to be cartoonish.

But their work today is deadly serious.

They represent nations that are still technically at war, even if the mortars, carbines and gunships of the bloody 1950s conflict have long since fallen silent.

The totalitarian regime is on the cusp of marrying nuclear and missile technology that would put Los Angeles, New York and Washington within striking distance of a nuclear holocaust.

The United States says that is unacceptable and will be dealt with, one way or another.

For North Korea the talks are hugely significant.

Standing beside the US president in front of a phalanx of cameras is an enormous step toward ending decades of international isolation and legitimises a regime which is among the world’s most ruthless.

Still, it remains far from clear that Pyongyang is willing to give up its nukes -— weapons that may be the ultimate guarantee of regime survival.

On the eve of the meeting, aides for both men were still scrambling to narrow yawning differences over “denuclearisation”, which means vastly different things to the two parties.

Trump will use what he says are legendary instincts to see whether Kim if bluffing, buying time or is serious.

In return, his administration may be willing to offer security guarantees, normalisation of relations, sanctions relief and economic aid that would transform North Korea from the sick man of Asia.

Secretary of State Mike Pompeo said on the eve of the summit that the United States is willing to offer the regime “unique” security guarantees.

“We will take actions to provide them sufficient certainty that they can be comfortable that denuclearisation is not something that ends badly for them,” Pompeo said.

“Just the opposite. That it leads to a brighter and better future for the North Korean people.”

Kim and Trump will first meet one-on-one in a closed session, before a larger meeting with key advisers, US officials said.

But the summit itself is unlikely to be the end game, more likely it is the start of a longer process of negotiation.

Pompeo said he was “very optimistic we will have a successful outcome with the two leaders.”

“There are only two people that can make decisions of this magnitude. Those two people will sit in a room tomorrow.”

However, Washington’s top diplomat also warned the United States would not be “duped” and that nothing less than complete, verifiable and irreversible denuclearisation was acceptable.