Home › News › Charges Slammed On Chief Of Army Staff Buratai, IGP, Others In US Court For Massacre Of Shiites & Pro-Biafra Activists

Charges Slammed On Chief Of Army Staff Buratai, IGP, Others In US Court For Massacre Of Shiites & Pro-Biafra Activists 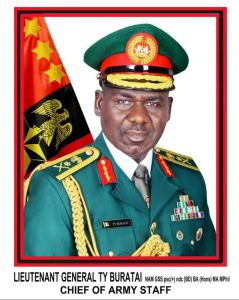 Indications have emerged that the Chief of Army Staff, Lt. Gen. Tukur Buratai, the Inspector General of Police, Ibrahim Idris, Governors William Obiano (Anambra) and Okezie Ikpeazu (Abia) and other top serving and retired government security officials would have to avoid setting their foot on US soil for sometime to come.

They are among 16 top Nigerian Government, Army and Police officials, against whom charges have been slammed against before the US District Court for the District of Columbia by legal representatives of ten pro-Biafra activists. They are accused of massacre and torture of Shiite muslims and pro-Biafra protesters.

The case is being fought for the litigants by renowned United States Attorney, Mr. Bruce Fein, and his Partner, Mr. W. Bruce DelValle, who is said to have recently spent five days (August 19 to 24, 2017) in Nigeria investigating the allegations against the sixteen men.

The legal practitioners investigated the alleged killing and torture of unarmed pro-Biafra protesters, particularly 10 of them who were allegedly killed or tortured by Nigerian security forces during 2016 pro-Biafra protests in Aba, Abia State, Onitsha and Nkpor in Anambra State and Asaba in Delta State.

Court papers published on Tuesday by News Express indicated the full names of the 16 defendants as well as the charges against them.

(5) IGP Ibrahim Kpotum Idris: Operational culpability in the pro-Biafra protests’ massacre in his capacity then as AIG Federal OPS.

Onitsha 302 Artillery; now at NIPSS, Kuru near Jos): Culpability in the pro-Biafra jubilation and protests’ massacre of 17th December 2015 and 29th and 30th May 2016 in Anambra State.

(15) Lt Col Sidi Umar Kasim (then Commander of 144 Battalion at Ukwa Ngwa that massacred IPOB activists on 9th of February, 2016 in Aba. 144 Battalion is a unit of 14 Brigade of Nigerian Army, Ohafia in Abia State, now at 14 Brigade, Ohafia): Culpability in the pro Biafra protests’ massacre.

(16) Retired SSS Director Musa Lawal Daura (SSS DG; his agency allegedly supplied hostile intelligence leading to the massacre in addition to participation of his men in the joint security taskforce or JTF that perpetrated the mass murder of pro Biafra activists): Culpability in the pro Biafra protests’ massacre.